Many people might not know about these foreign exchange certificates or what are they used for. When China first open their doors to foreigners, they issued these certificates to them when they visited China. It was issued from 1979 to 1994. Issued by the Bank of China, they sold at a premium of about 20% more than the actual value of the Yuan. So you can see my copies of the certificates are dated 1979 (in chinese).

These certificates are no longer issued or used in China. China has already catch up with the rest of the world. 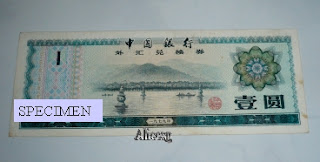 Most of the sources are taken from here.
Posted by alicesg at 9:03 pm

Hi Alice - Very interesting! Those certificates are quite pretty and would look nice framed and hung on a wall. They look like tiny works of art.

Thank you alyssa. Thanks for dropping by. I guess all these are histories. I have more interesting past travel tales coming soon.

We in HOLLAND are feeling a bit pity about the fact that Europe has 1 coin now,( for most countries in Europe) but as soon as we are going oversea's we enjoy the 'other money', so when we went to an arab countrie , a stamp in our passports prooved that we handed in the money when we left, itsnot alowed to bring money from that countries back home with you, even the coins we should hand-in (give back) strange but true though.

I like that from travelling the most the other money and the other food, also the habits and clothing, almosy everything I like to know!!!

bye have agood rest of the Sunday, thanks for you comments!

Hi JoAnn, thanks for the travel information. I did not know. I am glad I travelled to China when I was young, China has changed so much but there are many places in China that is still very interesting to visit.