We finally arrived at Jeju Island or Honeymoon Island by domestic plane. The flight from Daegu to Jeju Island met with some turbulences. The plane shook quite violently and at that moment I thought the whole plane would shattered in pieces....lol

Thanks goodness, we landed safely.

The next morning, we went for a wonderful abalone porridge breakfast and with all the energy we get ready for a tour of the island. 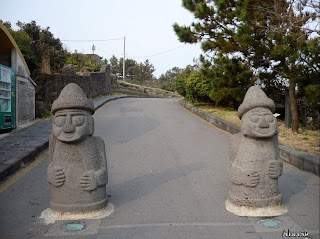 Around the island, the above statues are easily visible. They are known as Dol hareubang. They are considered gods offering both protection and fertility and were placed outside of gates for protection against demons travelling between realities.

The dol hareubangs are carved from porous basalt (volcanic rock) and range in size up to 3 metres high. The statues' faces feature grinning expressions and bulging eyes without pupils, a long, broad nose, and slight smile and their hands rest on their bellies, one slightly above the other. In sets of two, one will have a higher left hand and the other a higher right hand. The hat is commonly referred to as phallic or mushroom-like. (Source from Wikipedia) 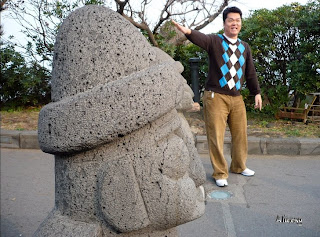 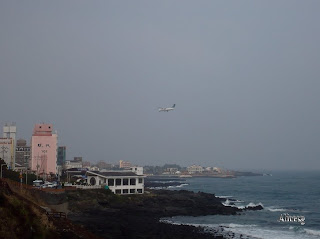 From the dragon head rock, we could see planes landing in the nearby airport. 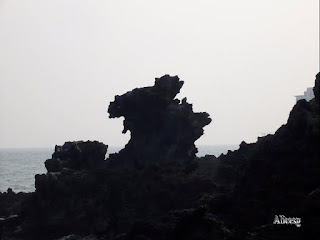 This is known as the Yongduam Rock or Dragon Head Rock, an unusual lava formation that looks like a roaring dragon rising from the sea into the sky.
No matter from which direction I looked, I could not find any resemblance of a dragon head. (But then I have never see a real dragon before....lol.) 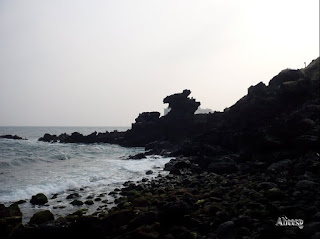 From where we stand, it was so windy and cold that I could feel that I would be blown into the rough sea any moment....lol. 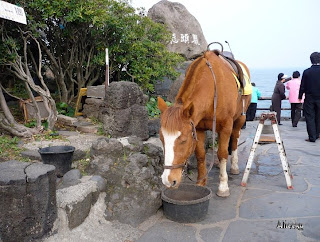 One need to pay to pose a photo with the horse. 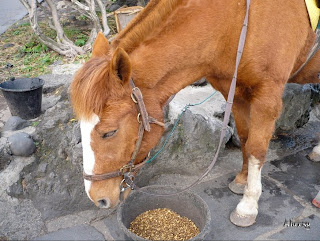 The horse is very beautiful but from what I heard from the korean tour guide that villagers in Jeju Island love to eat horse meat. Poor horse, would it be eaten after he served his purposes for tourists to sit and pose with him.
Posted by alicesg at 8:46 pm

What a great tour you took me on this morning. Love the history lesson as well.
As for the horse that would be awful, i can't imagine eating horse meat but i know many people that have.... I hope that this beauty won't be used for that.